A Frank Sinatra Stock Rally; Have Yourself A Merry Little Christmas!

Someday soon we all will be together .....If the fates allow

Until then......we'll have to muddle through somehow
So have yourself a merry little Christmas...... now.
A bit on the dark side and catches the mood this holiday perfectly. Markets produced the seasonal inflection point in mid October, as called for in Is it Stocksaggedon? , and currently are in the seasonal 4Q rally also referred to in aforesaid piece.
All of that is particularly relevant at this point , not because it s so original but quite the opposite, it is commonly known by experienced investors. The big banks are all forecasting a recession and lower lows next year. Volumes and market action suggest the positioning for that is on hold, awaiting the outcome of this end of year move. An example of this is the GS Outlook below; 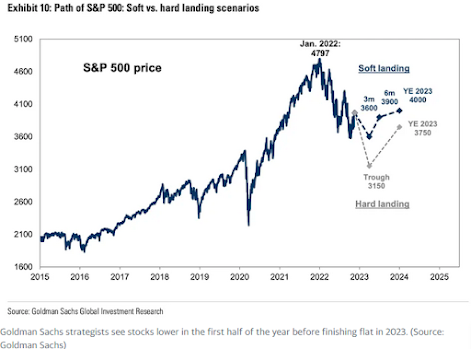 I cannot say I disagree, except for the rather optimistic hard landing low projected.
More importantly, how does MY "merry little Christmas " play out.
Please note my post from last February Am I Being Alarmist
forecasts 3400 to 2200 for a retrace to the 4th wave of lesser degree.
Where are we now? The SP has retraced 50% of its total move down and is only about
13% under it s all time highs. The Dow is 5% below!! 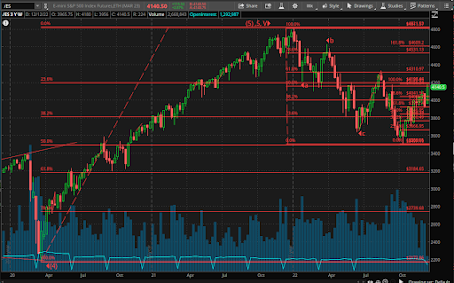 Note the .618 retrace of the SP move down is at 4300.
So the looked for end of year rally is providing a selling opportunity
between these levels and 4300.
So have yourself a merry little Christmas...... now.