click to enlarge
As can be seen, WTI is in the high side of that range and evidencing some recent weakness.
It does have a "look" that could produce a higher high at the top end of the range there, or even somewhat higher.  However the greater risk, short and medium term is to the downside from here.
It may turn out that a "b" wave chop down is in the cards with a subsequent "c" wave up,  but that kind of move can be deep and retest the lows .
See above Fib retracements, particularly the .618 and .78 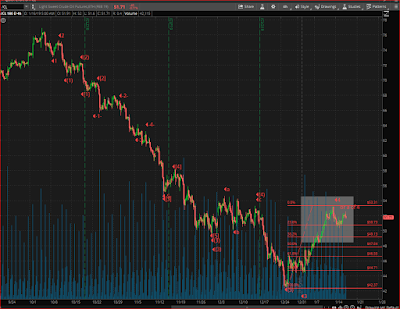 While the labeling of the subwaves above can be argued,  including whether the wave down is completed yet or not,  the $34 thrust down is probably NOT a completed correction.
At least one more wave down can be looked for, of similar degree, even in a "correction".  Even if this bounce carries as high as say $65.
However.

The Elliott count above is a not quite complete impulse wave down. So longer term likely more to go with lots of 4 handle time.

Of course in Elliott Wave there is always an ALT possibility.
Have fun.